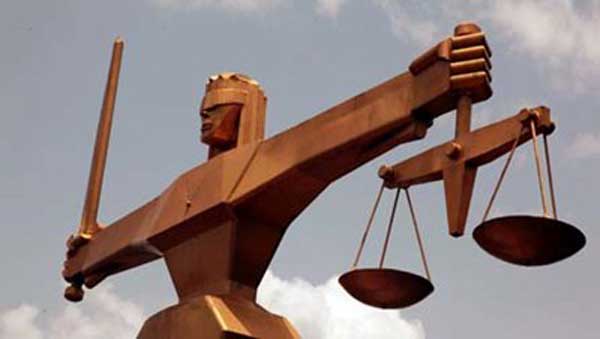 Just a few days after a Federal High Court, sitting in Lagos restrained the Attorney-General and Commissioner for Justice, Lagos State from allocating any portion of a property located at B20, Wole Olateju Crescent, Lekki Phase 1 in Eti-Osa Local Government Area, the state has commenced demolition of the disputed property in violation of the order of the court.

The plaintiffs, Admiralty Fleet Limited (BICS Garden), and a retired Naval officer, Admiral Festus Porbeni, had in suit number FHC/L/CS/1384/21, asked the court to restrain the Attorney-General of Lagos State, and the Lagos State Special Task Force Unit from allocating any portion of the parcel of land, building or enter into the disputed property pending the hearing of the substantive suit.

The plaintiffs through their counsel, Messrs. Adetunji Oyeyipo, alongside, Abiodun Olatunji, had in a Motion on Notice for Interlocutory Injunction brought pursuant to section 43 of the constitution 1999 as amended, section 1, 2, and 3 of the lands (title vesting) ACT CAP. L7 LFN 2004, sections 10, 11, 12, and 13 of NIWA Act CAP 47 LFN 2004, order 26 (1) (2) and order 28(1) of the federal high court civil procedure rules 2019, urged the court to restrain the defendants from entering into the disputed property pending the hearing of the substantive suit.

Consequently, Justice Osiagor in his order restrained the first and third defendants from entering into the said property for the purpose of forcefully removing the plaintiff or any of the plaintiff’s equipment, machinery, structures, and boats pending the hearing and determination of the suit.

However, Lagos state in defiance of the court order allegedly invaded the premises and demolished the property, and damaged some equipment in the process.

According to the plaintiffs, sometime in 1996, the second applicant also acquired an additional parcel of land located at Lekki, at Lagos Island Local Government Area, measuring 3239.51 square meters from Lagos State, and was granted a Lagos State Certificate of Occupancy in respect of the land.

They added that the second applicant in compliance with revenue payment advice received from the second respondent (National Inland Waterways Authority) on December 18, 2006, and on June 14, 2007, paid the sum of N356,500.00 and N120, 000.00 for permit approval fee, inspection fee, shore utilization and permit renewal, inspection fee and structure for waterways respectively.

The plaintiffs averred that on December 4, 2008, the second applicant had applied to the National Inland Waterways Authority for permits to construct a jetty and boat club at Plot 6 BLK A15 off Admiralty Way, Lekki Lagos, which was approved.

It further stated that the Court of Appeal, in a judgment delivered on April 14, 2011, in Appeal No: CA/L/10/09, had affirmed that title to any land within 100 meters limit of the 1967 shoreline of Nigeria and all land reclaimed from or near a lagoon, sea or ocean were vested exclusively in the Federal Government of Nigeria by virtue of the Lands (Title Vesting, ETC.) Act Cap L7 LFN 2004 and the Nigeria Inland Waterways Authority [NIWA] Act Cap N47 LFN 2004.

They averred that on September 30, 2021, men and officers of the Lagos Task Force without any prior notice or any valid court order forcefully entered the disputed premises and began marking its equipment, machinery, structures, and boats for removal within 48 hours.

She stated that the marking of applicants’ equipment resulted in the chaos following which the Lagos State Task Force informed the applicants to come for a meeting on Monday, October 4, 2021.

“While we were preparing for the meeting with the Chairman, Lagos State Special Task Force, the Task Force invaded the disputed property with bulldozers, Black Maria vehicles, and trucks loaded with heavily armed policemen numbering over 50 and without any valid court order immediate demolition of boundary fences and staff quarters housing about 25 staff members and their families,” they added.

But, the Attorney-General of Lagos State, and the Lagos Task Force, in their Notice of preliminary objection filed by their lawyer, Adebayo Haroun challenged the jurisdiction of the court to entertain the suit.

He argued that the subject matter was not one of the specific matters listed in Section 251 of the 1999 Constitution, which the court is conferred with jurisdiction to entertain.

Lagos State maintained that the land has been allocated to a third party who has taken possession and the government only demolished the place because it was being occupied by squatters, miscreants, and hoodlums.

The defendants stated that the suit by its nature was a challenge to the administrative actions of officials of Lagos State government under a Law enacted by the House of Assembly of Lagos State and the Lagos State Property Protection Law.

They, therefore, urged the court to strike out the suit as presently constituted.