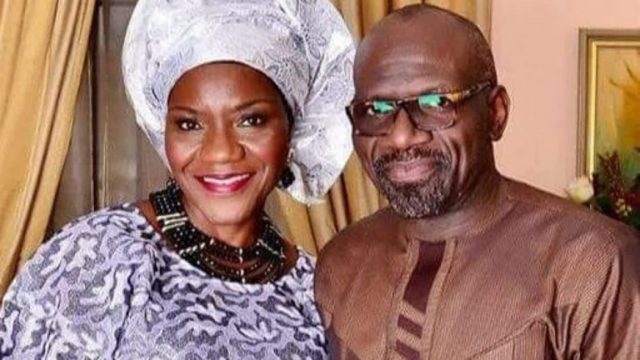 Kehinde, the twin sister of Pastor Taiwo Odukoya, Senior Pastor of the Fountain of Life Church in Lagos, has died.

The cleric’s twin sister died on Thursday according to reports but was made public a few hours ago when the cleric’s daughters, Tolu Ijogun and Toby Enuha, shared the news of her death on their Instagram pages to grieve the loss of their dear aunty.

Tolu wrote on Instagram, “My Dearest Aunty K, my birthing partner and one of my closest aunties… You were always there for me when I needed my mother the most. You held my hand and encouraged me… To say I will miss you is such an understatement. Rest on Aunty, love you.”

Enuha, known as @drdebso on Instagram posted the picture of the deceased on her story with a brief tribute, “Love you Aunty K. You will be greatly missed. Rest in peace.”

Her death comes weeks after the clergyman’s second wife, Nomthi Odukoya, died of cancer in November after battling it for two years.

When she died Taiwo wrote, “With deep regret and gratitude to God, I have to announce the passing of my wife, Pastor Nomthi Odukoya.

”She battled cancer for the better part of two years. She stood on the Word of God, and she fought.

“She gave me 11 beautiful years of marriage and two wonderful boys, who I know will be very significant in life.

“I loved her with all my heart, but who am I to fight with the will of God. The truth is, at one point in our lives, we all will have to say goodbye. So for now, till we meet again in glory, Goodbye Nomthi.”

Nomthi and Taiwo, both senior pastors in the church, celebrated their tenth wedding anniversary in January 2020.

Pastor Taiwo’s first wife, Bimbo Odukoya had died in a plane crash in 2005. She boarded Sosoliso Airlines Flight 1145 from Abuja to Port Harcourt.

The airliner crashed during a landing at Port Harcourt International Airport on December 10, 2005; Bimbo survived the initial collision but died from injuries on December 11, 2005.

May they find peace even in this time of great loss.