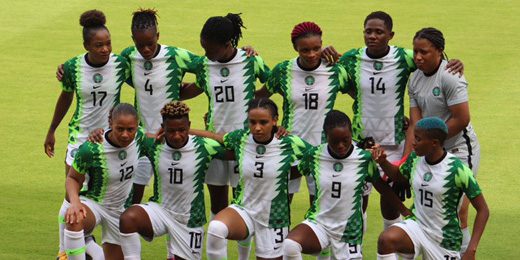 Super Falcons beat Ghana’s Black Queens 1-0 on Sunday evening to reach the final round of the Women Africa Cup of Nations qualification series, to be hosted by Morocco next year.

On Sunday night, the nine-time African champions lost 1-0 to their hosts in Accra but won 2-1 on aggregate.

Both teams finished with 10 players after Ghana’s captain Portia Boakye was sent off for a second bookable offence, and Nigeria’s left-back Glory Ogbonna was also sent off by Ivorian referee Zomadre Sonia Kore.

Midway through the second half, Princella Adubea scored Ghana’s goal as the Super Falcons called for fair play.

Captain Asisat Oshoala missed an opportunity to level the match following the late goal. The Black Queens launched onslaught after onslaught but failed to get the goal that tied the game and forced a penalty shootout at the Accra Sports Stadium.

Falcons advanced to the final round, where they will play the Lady Elephants of Cote d’Ivoire in February 2022.