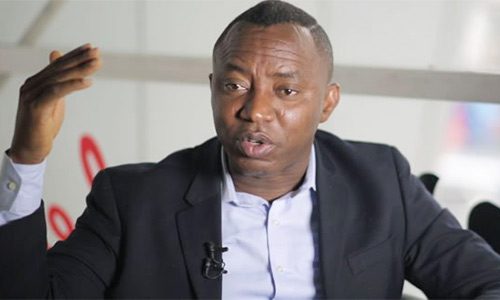 The founder of Revolution Now, Omoyele Sowore, has given the Federal Government seven days to reactivate his National Identity Number.

Failure to do this, the activist threatened to sue the Nigerian government.

This was contained in a pre-litigation notice written to the Attorney General of Nigeria and other Federal Government agencies by his lawyer, Tope Temokun.

Sowore earlier raised an alarm that the Federal Government had deactivated all his means of identification.

“The deactivation of his National Identity Number is politically motivated to stop him from participating in the 2023 generation elections.

“The action of the Commission to deactivate his National Identity Number amounts to depriving him of his citizenship and national identity.

“It is against this background that we write to you to demand that our Client’s National Identity Number be reactivated with immediate effect.

“TAKE NOTICE that if after the expiration of SEVEN DAYS, inclusive of the date of service of this letter on you, our Client’s National Identity Number is not reactivated, we have the full instruction of our Client to approach the appropriate Court with jurisdiction to seek this redress and this shall be without further recourse to you.

“TAKE FURTHER NOTICE that this letter is also issued to you as a Pre-Action Notice.”