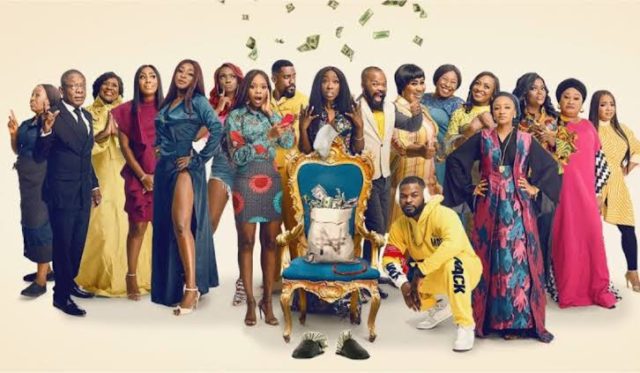 The sequel to EbonyLife 2018 hit comedy film ‘Chief Daddy’ has been met with a wave of criticisms and negative reactions on social media.

Produced by Mo Abudu, media entrepreneur, movie and TV producer the sequel is exclusive to Netflix, a global streaming platform.

It was released on Saturday, January 1, and has since been getting different reviews from movie lovers with feedback more negative than positive.

The movie was directed by Niyi Akinmolayan, and follows a billionaire industrialist who dies after being a benefactor to an extended family of relatives, household staff, and mistresses.

The industrialist’s will, however, creates a crisis in his family.

A large number of Nigerians faulted the movie’s quality and storyline, arguing that it was below their expectations.

A user wrote, “Disjointed, waste of funds, total waste of time N talents. Nollywood just proved that they can be bad on Netflix, Dstv N everywhere, no matter the budget.”

Another user said, “-The film does not belong to any category.. e.g comedy, action romance -it looks like a waste of investment to me.”

“See how Nigeria is putting Chief Daddy 2 into trash can.. That’s how they dragged their music artistes for years before they get better.

“I’m reading reviews of Chief Daddy 2 and I’m in awe that people expected something different,” another user wrote.

However, a few other users had contrary views, stating that the movie was okay.

This was followed by other negative reviews

“Chief Daddy 2 is like a secondary school production where the entire year had to get a speaking role, they don’t know what’s going on, it’s just vibes. And their confused parents are in the audience clapping because they think they’re children will be stars,” a user wrote.

Another commenter Malam Mohammed Shuaibu even escalated his misgivings further by reporting producers of the film to Censors board.

“I have written an email to the Nigerian Film & Video Censors Board complaining about a character referring to Nigeria as “FANTASTICALLY CORRUPT” in Chief Daddy 2, a film made in Nigeria.

“If they don’t do anything about it, I will escalate the matter further”.

Reacting to the film, Nigerian screenwriter, Dami Elebe, appealed that emphasis should be given to screenplay by Nollywood filmmakers.

She tweeted, “Anyway, I’m happy people are having the conversation. Maybe some people in Nollywood will stop hiring writers after they’ve casted and got location.

“Maybe some of you will give story development a chance and also pay well for it. Maybe you people will stop hiring only famous people, confusing them as influencers. Maybe talent will thrive this year.”

For Twitter user @I_Am_Winter, “Chief Daddy 2 is such an embarrassment to Nollywood.”

Another Twitter user @Innanoshe calls the film “an atrocious hodgepodge of terrible acting and directing and ghastly writing.”

@IfeanyiOlabode, however, thinks that the film benefits even from the bad publicity.

“This Chief Daddy 2 strategy is working. Make an unbelievably terrible movie, make everyone talk about it. Make everyone want to watch it to confirm it’s terrible,” the user tweeted.

“This is not fair sha, making people go through that! It’s not fair. I had to watch till the end to see if there’s a redeemable quality to the movie… THERE WAS NONE”.

Ife @diaryofa9jagirl wrote: “I just watched Chief Daddy Part 2 on Netflix.Forghusake!!! Forghusake!!! What was all that now? Ahn ahn.

Ifeoluwa Aboyeji said: This Chief Daddy 2 is a comfortable 0/10.

Meanwhile, on her Instagram page on Sunday, the film’s producer and EbonyLife boss, Mo Abudu, celebrated the movie for being “the number 1 in Nigeria today” on Netflix.