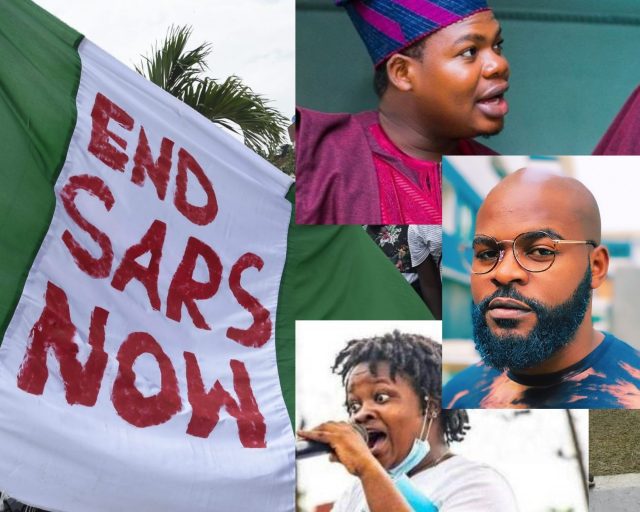 On Wednesday, October 20, many Nigerian youths would be commemorating the Lekki Tollgate shooting one year after the actual event, with some persons showing interest in having a peaceful protest on that day.

The commissioner of Police, Hakeem Odumosu has however said that no protest should be held as “the police in the state will not fold their arms and allow some misguided elements disrupt the peace and serenity currently being enjoyed in the state.”

He also said the police would “use all legitimate means within their constitutional powers to suppress the planned protest,” according to him, this would “forestall breakdown of law and order.”

In the midst of these, popular lawyer and activist, Femi Falana SAN said the statement to stop the proposed peaceful protest in the state by the CP is illegal.

With the back and forth, a report reveals that some youths are planning a counter-protest against the proposed Wednesday EndSARS peaceful protest at the Lekki tollgate axis.

Tagged ‘Defend Lagos’, a trending message about the rally reads:
“About a year ago, this carnage fell on Lagos State while Lagosians thought it was just going to be a protest. Lagos State was destroyed by End SARS protesters.

“Lagosians are ready to defend Lagos NOW. Never again will Lagos be destroyed.”

This counter rally coming up few days before the 20th is not surprising as it strikes a pattern with the counter-reactions encountered during the EndSARS peaceful protest last year.

During the protest last year, hoodlums who were unleashed to hijack the protest in Lagos and Abuja were seen leaving the scenes in government-registered vehicles.

In Abuja, videos shared online revealed the counter-protesters were paid between 1,500 and 3000 naira to upstage the endSARS protest. If this happened last year, how unsure are we that this group seeking to ‘defend Lagos’ is not sponsored by persons in the government or powerful politicians?

Influential individuals who championed last year’s protest; Debo Macaroni, Falz, Rinu, etc have spoken out on the order by the CP, Falz and Mr Macaroni recently spoke out on how the virtual event that was planned to replace the protest was been threatened by powers that be, leading to its eventual cancellation.

Mr Macaroni who was arrested along with several others last year during the protest suffered inhumane treatment from the police has however revealed he is down for the protest.

He recently called out the Lagos state government for holding an event around the time of October 20, and blamed celebrities who would be attending, while stating that he isn’t in anyone’s way of getting money but that civil issues that concern all should not be joked with.

He asked how the Lagos state government plan to do their event with law and order being disrupted in the state but “Lagosians can’t gather for their own peaceful summit??”

The #EndSARS protest was a public outcry by the youth to the federal government of Nigeria to end police brutality, extrajudicial killings, extortion and abuse of power, mostly by the defunct Special Anti-Robbery Squad (SARS) officers. The protest was held between October 8 and 20, 2021.

The tollgate has not been operational since October 20, last year.

Falz in a viral video shared his thought on the government’s reaction to the proposed protest pidgin English “October 20 don dey come like this, for your information, police commissioner say make we stay inside, una hear abi una no hear? Them go dey disguise.

“They said on that very day, make we no commot. Dem dey craze? No matter how many them be. As I dey talk to you now, police don station for toll gate. Una go commot abi una no go commot? They no born them…October 20 is coming; for your information, the police commissioner has said we should stay inside.

“Have you heard that? They said on that day, we should not go out to protest; they are crazy. It does not matter how many police personnel they bring. Already, police officers have been stationed at Lekki Toll Gate. Will you go out to protest or not? They dare not…”

In FCT Abuja, some people are planning to hold a processional candle session at the Unity Fountain.