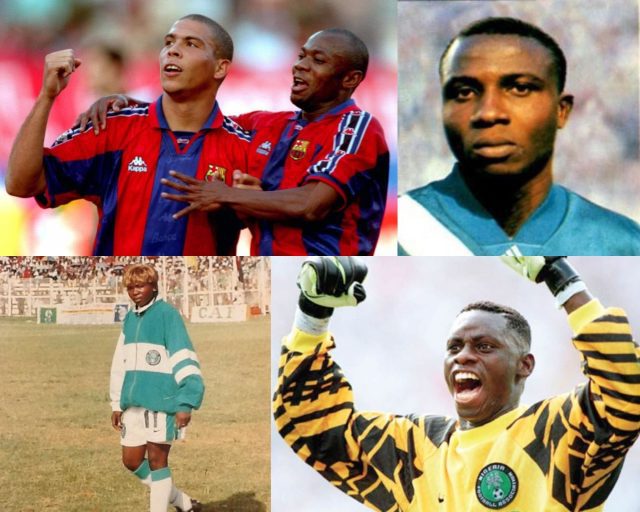 Football talents all over the world usually start with dreams and skills, which they hone to the finest with the hope of being picked by scouts at any available tournament or trials they attend. In Nigeria, football talent is seen in kids, teenagers and even adults on the streets playing different ‘asides’ or street football, but not all these talents get the recognition they dream of and for those who get that recognition, not all of them last enough get to the peak of their careers.

There are names that when mentioned would resonate in the ears of football lovers in Nigeria, but what would follow next is, what happened to them? Many Nigerians’ football dreams died at the slaughterhouse of injury which was worsened by the poor health system. Let’s look at big names in the history of football in Nigeria that was fizzled out by injury.

After winning the 1996 Atlanta Olympics football gold with the Super Eagles as the No.1 goalkeeper, Joseph Dosu had a blossoming career ahead of him, or so he thought.

Dosu, after his Atlanta performance, looked destined for greatness as one of the best goalkeepers of his generation and was one of Nigeria’s top keepers when misfortune struck, turning his career in the other direction, leaving him devastated.

He had just signed for Italian Serie A club Reggiana after the Olympics but never got to play for them after an accident along the Ikorodu Road in Lagos in 1997 after Nigeria defeated Guinea 3-0 to qualify for the 1998 World Cup in France leaving his spinal cord damaged and career ended even before it began.

A young player fresh from St. Finbarrs College, Akoka-Lagos, Ugbade captained the Nigeria U-16 male football team that won the maiden edition of the 1985 FIFA U-16 World Championship held in China.

In 1989, he was injured against the former USSR during a quarter-final match of the FIFA U-20 World Cup in Saudi Arabia, but because the Flying Eagles had used up all of their substitutes, he had to complete the match and score the equalising goal in a match known as the ‘Miracle of Dammam’, following a win by the Flying Eagles on 5-4 penalty shoot out.

Despite his involvement with the Nigerian national team for some time, injuries and poor performance in the later years of his career denied him the opportunity to compete at the 1994 World Cup.

He was forced to retire early due to injury.

Former African footballer of the year and ex-Barcelona player whose record fee transfer of $3.6 million to the Catalan club in 1996 made headlines, Amunike was indeed at the peak of his career.

Unfortunately, injuries wouldn’t have him live his full potential as the winger’s football career was cut short by a knee injury, making him lose his first eleven shirt with les Blaugrana and depriving him of an appearance at the France ‘98 World Cup with the Super Eagles.

As a result of his injury, he never fully recovered and was released by Barcelona. He then played in the second division for Albacete, Busan l’Cons of South Korea, and Al-Wahdat SC of Jordan before retiring at the age of 33 to become a football scout.

After helping Nigeria’s Under-17 to win the FIFA World Cup, Amunike is now a full-time coach and was appointed the manager of the Egyptian Premier League club, Misr Lel Makkasa SC in February 2021.

As a Super Falcons dependable defender, Jerome had a very successful career in the Nigeria national women’s team and clubs until she twisted her knee during a match for Nigeria.

She underwent a series of surgeries abroad with the sponsorship of the Nigerian Football Federation before it refused further treatment and ended her promising football career.

Prisca sustained a career-wrecking injury while running away from armed robbers who invaded the team’s camp at the Obasanjo Farms Hotel, Ota as they prepared for the Sydney 2000 Olympics.

The Super Falcon captain missed the Olympics following an accidental severance of her lower leg ligaments, she underwent a five-hour surgery to save her leg and had skin grafts in the United Kingdom to return to football.