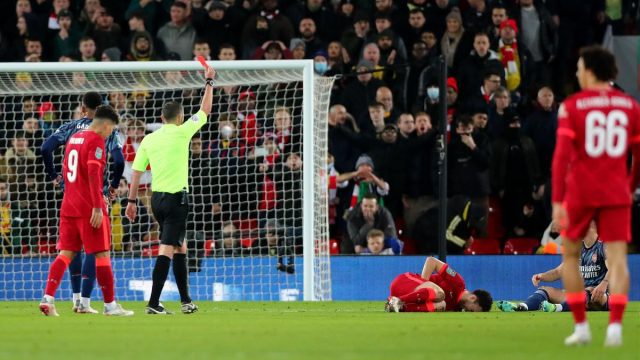 Arsenal midfielder Granit Xhaka has apologised to Arsenal fans following his dismissal against Liverpool on Thursday evening, as the Gunners still managed to hold out for a goalless draw despite playing with a 10-man team during the first leg match of the Carabao Cup semi-final at Anfield.

Xhaka was shown a straight red card, making it five times he has been sent off the field in his Arsenal career, following a challenge on Liverpool attacker Diogo Jota, that prevented a chance on goal for the striker.

The 29-year-old will now miss the North London derby against Tottenham on Sunday in the Premier League and the second-leg against Liverpool next Thursday.

On Instagram, the Swiss international apologised to the supporters, saying: “I want to apologise to everyone. I am so proud of my team and the spirit that they showed to keep a clean sheet tonight. #GX34.”

When asked about Xhaka’s red card during the post-match interview Arsenal boss Mikel Arteta insisted he had not seen the playback of the incident.

Arteta said: “I haven’t seen it. I went to do the interviews outside and now here, so I cannot judge it. I haven’t seen the action.”

His reaction to Xhaka missing the north London derby this weekend was:

“Yes (it makes the match even harder), but we came here and we are missing nine or 10 players already.

“Listen, we do not know what to expect the next day so we cannot be looking at that and all the time having to fall into that and use it as an excuse.

“We have to play games, it is our job. That is the situation we are in. It can change and it can change to be in a more difficult position. The team has to rebuild and we have players that are with a desire to play and on Sunday, we’ll do the same thing.”