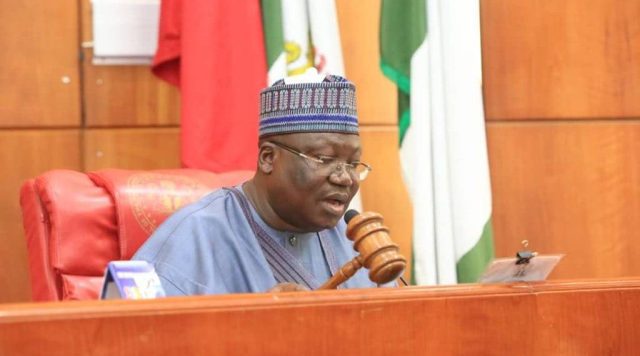 Senate President, Ahmad Lawan, said lawmakers will review the Electoral Act Amendment Bill and the 1999 Constitution when it resumes plenary in January.

He made this statement on Friday.

He also said that the promises made to Nigerians with respect to legislative focus have been kept by the ninth National Assembly.

Pointing out the gains of the Assembly, Lawan stated that the jinx of the Petroleum Industry Bill, which had defied passage for about two decades, was broken by the Assembly which got it signed in 2021.

Lawan also stated that the Senate is determined and will never be distracted from the implementation of its Legislative Agenda as spelt out following its inauguration in 2019.

He disclosed this in a statement he personally signed, titled ‘Let’s keep faith in Nigeria – Senate President says in New Year message.’

He said, “The Year 2021 was challenging for people all over the world. It is praiseworthy that beyond the challenges, we can see the rays of a bright future from the new year.

“As your elected representatives, our new year pledge is to continue to pursue our common desire of a just, peaceful and prosperous country. We promise to continue to discharge this responsibility without fear or malice, confident that by working in harmony, Nigerians will build the great country that is their abiding dream and manifest destiny.

“Without a doubt, insecurity is today one of our biggest challenges. However, I can attest that the government is resolutely addressing these challenges.

“As a critical contribution to that effort, the National Assembly has appropriated more funds in the 2022 budget to enhance the operational capabilities of our security agencies.

“My message to fellow Nigerians is that we should not lose faith in our country and its democratic institutions. The current challenges will be overcome and become mere footnotes in our glorious national history.

“The ninth National Assembly is focused and will never be distracted from the implementation of its Legislative Agenda as we had spelt out following our inauguration in 2019.
“Within the context of that Agenda, we have passed many critical bills and have many more to roll out in the new year.

“At the beginning of 2021, we made specific promises to the Nigerian people with respect to our legislative focus. We are proud that we have kept those promises.

“For instance, breaking the jinx of the Petroleum Industry Bill(PIB), which had defied passage for about two decades, was high on our agenda in 2021. With the cooperation of the Executive and the support of the key stakeholders, we were able to break the jinx. We passed the bill and got it signed into law in 2021.

“This piece of legislation will significantly impact the Nigerian economy and propel a significant turnaround in our oil and gas sector.

“It was with the same spirit of patriotism that we handled the Electoral Act amendment bill. We believe that sustainable democratic governance requires a transparent and credible electoral process.

“Following the decision of President Muhammadu Buhari to withhold assent to the bill, we shall make further consultations on the issues he stated for that decision, on our resumption of plenary in January.

“We shall find a way forward on this critical legislation in the new year. We are determined to deliver an Electoral Act that stands the test of time in safeguarding democracy and the electoral process in Nigeria.

“We are also looking forward to receiving the report of our Committee on the Review of the 1999 Constitution upon our resumption from recess. We believe that the outcome of this very important exercise will promote unity, stability and peaceful coexistence in our country.

“The Electoral Act amendment bill and review of the 1999 constitution will be topmost on our agenda as we reconvene for Legislative business in the new year.

“Upon our inauguration in 2019, the ninth National Assembly had promised to reset the national budget calendar to January to December cycle, to make our fiscal system predictable and consistent with international best practice. We have since 2019 passed the national yearly budget every December to enable the President to sign it into law before the new year. In consistent with this, on Friday 31st December 2021, we witnessed the signing into law by the President, the 2022 Appropriation Bill.

“Timely passage of the budget enhances the performance of the economy and has specifically aided our recent quick recovery from recession. We are determined to sustain this trajectory to act as an impetus to our economic planning and projection.

“The much that we have been able to accomplish this far can be attributed to the commitment and dedication of my fellow Distinguished colleagues and Honourable members and the prevailing atmosphere of cordiality between the National Assembly and the Executive. We intend to sustain and even improve on this in the new year and beyond.

“I appeal for the continued understanding and support of all Nigerians for the government at all levels. As your legislators at the federal level, we will continue in the true spirit of our mantra to “work for Nigeria.”