LagosPost.ng LagosPost.ng is empowering Lagosians with credible and trusted information that will keep them informed, knowledgeable, educated and, most importantly, be aware of Everything Lagos.
Home Sport Football Paris stands still at Lionel Messi’s arrival
Tweet
Share
Share

Paris stood still as Lionel Messi arrived yesterday, Tuesday, at about 3:30 pm. The superstar arrived to the cheering and warm welcome of the city.

Before the Argentine national boarded a flight at all, several hundreds of fans were ready waiting for him at the Bourget airport in France.

On his arrival, Messi had completed a mandatory medical checkup for his transfer to Paris Saint Germain (PSG). He later visited the PSG’s Parc des Princes stadium, where he was again met by a whole crowd of fans. 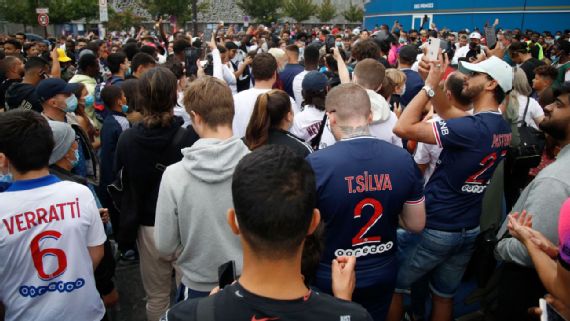 The star footballer was afterwards seen holding a No.30 jersey which was his first number at Barcelona. It was reported that Neymar, his long time friend and ex-teammate at Barca had offered him the No. 10, but Messi declined.

The club had teased Messi’s arrival with a post on their official social media handle with a graphic that read, “New diamond in Paris” in reference to Messi.

© Newsmag WordPress Theme by TagDiv
We use cookies to ensure that we give you the best experience on our website. If you continue to use this site we will assume that you are happy with it.AcceptPrivacy Policy