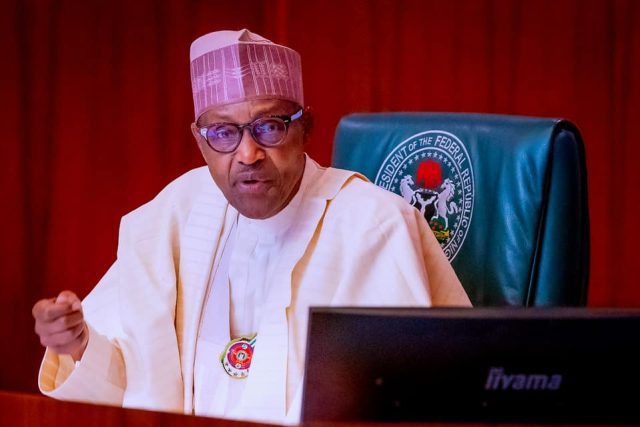 President Muhammadu Buhari says his administration will continue to support serious investors to set up businesses that will take advantage of huge reserves of resources in different parts of the country.

According to him, the inauguration of the cement plant is an indication that the Federal Government policies on economic diversification, job creation and creating an enabling environment for businesses to thrive are working.

He described the plant as the largest private sector employer of labour in the North-Western part of Nigeria.
The President recounted that in 1985 as the then Head of State, he was at the same location to commission the 2nd line of the facility.

”Today, almost 37 years later, to commission the fourth line is a very special day for me personally.
”As you all know, one of the key economic pillars of our administration has been to create an enabling environment for businesses to thrive.

”This is necessary for job creation and indeed, for our economy and national security.

”In the past few weeks, I visited Ogun and Kaduna state where I observed many private sector investments in action. And today, I am here in Sokoto to commission this multi-billion Naira project.

”It is therefore very clear for all to see that our policies are working. Progress is gradually being made in all parts of the country,” he said.

He appreciated the Founder of BUA Cement, Abdul Samad Rabiu and the whole team for the great work they are doing in supporting the government’s economic diversification and job creation agenda.

According to the President, the company, has completed four new cement plants of similar capacity in the last five years in different parts of the country and is set to complete two more plants soon.

This, he said, had shown through these investments that they believed in Nigeria and its potentials.

He commended BUA and other entrepreneurs for making Nigeria self-sufficient in cement and a net exporter of the strategic product.

”I am excited that through these investments, BUA Cement has created employment opportunities for our citizens. Today, BUA is the largest employer of labour in the North-West region.

”I always remind Nigerians that every region, indeed every state in Nigeria sits on huge reserves of resources.
”For example, in this area, Kebbi, Sokoto and Zamfara can boast of rice production, gold and other precious metals development and of course, heavy industries like cement manufacturing.

”As a government, we brought in policies and mechanisms to support such investments in a legal, ethical and inclusive manner.

”For example, we have the National Food Security Council on Food Security Matters and the Presidential Artisanal Gold Mining Development Initiative to develop local artisans gold mining and ensure health and safety of mining workers and protect the environment.

”We remain prepared to support serious investors to set up businesses that will promote opportunities through value addition so as to take advantage of the huge market here, as well as in the greater African region and the world at large.”

He highlighted other efforts to bring even development to all parts of the country.

The President expressed confidence that the Ajaokuta–Kaduna–Kano (AKK) gas project, when completed, would bring gas for domestic and industrial purposes from the South South region to the South East, North Central and North West Geopolitical zones.

He said the AKK project would significantly reduce cost of operations for industries in the regions.

He also reassured Nigerians that his government would continue to invest heavily in roads and rails to ease movement of people, goods and services, with a view to facilitating trade while lowering logistics costs associated with the inefficiencies of bad roads and bridges.

On security, Buhari reiterated his commitment to bringing peace and stability to all parts of Nigeria, listing a raft of measures undertaken by this administration to ensure that normalcy returns to the country.

”We continue to recruit and equip security personnel while expanding our social investment programs to support the youth and some of the most vulnerable members of our communities.

”You should all be reassured that we will win this battle against the criminal elements looking to destabilize our nation by hindering the progress of our economy.

”I want to now call on all entrepreneurs and businesses to emulate what is being done here.

”The task of nation building requires all hands to be on deck. The public and private sectors must collaborate if we are to achieve our aim of collective peace and prosperity across the entire nation.”

Chairman, BUA Cement, who commended the President for creating the enabling environment for businesses to thrive, acknowledged the support of the Central Bank of Nigeria (CBN) and its Governor in setting up the gigantic project.

He announced that, ”so far, we have invested over a billion dollars in the past four years and we urge the CBN to continue to back up industries like ours that used locally sourced raw materials to add value.”

He pledged that BUA would continue to invest more in the cement industry until Nigeria became self-sufficient and the commodity was made available, accessible, and affordable for all Nigerians.

”In the past six years, we have completed four plants – two in Obu, Edo State and two in Sokoto (of which this Sokoto line four is the fourth) with BUA’s total production capacity now standing at 11.5million tonnes with the completion of this plant.

”Next year, we plan to finish the construction of two new plants of three million metric tonnes each for which construction is ongoing – one in Edo and the other, here in Sokoto.”

Rabiu said he looked forward to the President commissioning these plants next year which would bring total production capacity to 17.5 million metric tonnes.

Buhari calls for collaboration against economic challenges in West Africa

D’banj, Davido, others to perform at Africa Day Concert