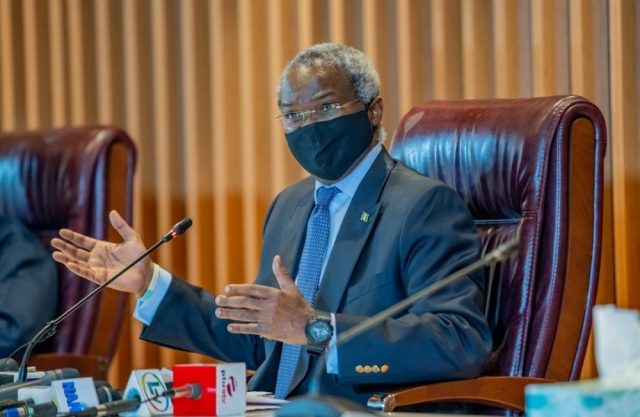 Mr Babatunde Fashola, Minister of Works and Housing, says the country cannot continue to depend on other nations for vaccines during outbreak of pandemics.

Fashola, who is the Chairman of the Nigeria Institute of Medical Research (NIMR) Foundation, made this assertion virtually during a news conference organised by the foundation on Tuesday in Lagos.

He noted that there was a need to develop human capacity in medical research to proffer solution to existing diseases of public health concern and other eventual pandemic like COVID-19.

The former governor of Lagos State said the NIMR Foundation, a non-profit organisation, was initiated to raise and mobilise funds to promote medical research work that would be of benefit to Nigerians.

Fashola said: “We cannot continue as a nation to depend on other nations of the world for vaccine during an outbreak of pandemic.

“NIMR was founded in 1977 with the vision to lead medical research, while her contemporary in the U.S, Uk, India and other parts of the world are undertaking groundbreaking, farsighted development via research work in biosciences and biotechnology.

“NIMR has been limited due to funds, but it might surprise you that NIMR has demonstrated clearly to come up with research works despite this challenge in the areas of diagnostic kits for COVID-19, sickle cell, therapies and remedies that are life-changing.”

According to him, the target of the foundation is to raise N10 billion to kick-start the programme that will be channelled into critical areas of research.

Speaking also, the 14th Emir of Kano, Lamido Sanusi, and also a member of the NIMR Foundation Board of Trustees, said it was time for the country to have that sense of urgency to improve access to education and healthcare.

Sanusi added that the foundation had engaged the service of UTL Trust Management Ltd., a leading asset management company, to handle funds that would be raised for critical areas of research.

“For us to appreciate what is going on here, we have to look beyond statistics and look at the number of humans behind most of these statistics of people dying or suffering from diseases that are peculiar to people in this part of the world.

“Some of these deaths are avoidable if we have the right mechanism in place to address them, that is why an advisory board is already in place to provide direction on the research work that will be embarked on.

“The foundation will also publish its reports on a yearly basis in line with global best practice,” he said.

Another member of the Board of Trustees, Prof. Oye Gureje, in his speech, noted that there was a need for the NIMR and the scientific community in the country to be nimble in its approach to research.

Gureje said that nimbleness would give researchers the ability to refocus attention and deploy previous scientific capacity and capability to proffer solutions to new health challenges, such that is visible in the developed countries.

“A feature that every research organisation must have is nimbleness.

”Three years ago, nobody ever imagined that something like COVID-19 will come up, even in the advanced research world, nobody has it on their priority list.

“But nevertheless, we can see what has happened in the last 18 months and this is due to the refocusing of major research organisations in the world, unprecedented development of vaccine was achieved.

“This was made possible because these organisations are nimble and one of the ways to achieve this is to build capacity for health research in the country,” he said.

Gureje, the Nigeria Director of World Health Organisation Collaborating Centre for Research and Training in Mental Health, Neurosciences in the University of Ibadan, said most of the research work by the foundation would focus on diseases that are peculiar to Nigerians.

He said they are non-communicable diseases, sickle cell, neglected tropical diseases among others.

Speaking earlier, Prof. Babatunde Salako, Director-General of NIMR, said the foundation was initiated to address some of the challenges hindering researchers from carrying out ground-breaking research work to tackle some of the health threats to Nigerians.

He said: “Nigeria, although Africa’s largest economy with potentially the highest concentration of medical schools and universities on the continent, faces some of the worst public health challenges including the highest global burden of malaria.

“Others are the high burden of HIV, tuberculosis and emerging infections such as Lassa Fever, recurrent outbreaks of cholera, meningitis and yellow fever and increasing levels of non-communicable diseases.

“This disconnect has been attributed largely to the insufficient number of world-class researchers and scientists to conduct research that informs policy and development of vaccines, medicines and technologies to address the nation’s healthcare needs.

“Presently in the country, promising junior, mid-level and well-trained senior researchers are often brains drained out of the country because of lack of research funds to enable them to conduct high-quality research in-country.”

Salako noted that there was an urgent need to reverse the challenge through a sustained funding mechanism over the next decade that would systematically train a critical mass of researchers to become global leaders.

“Empowering our researchers will help them to come up with also high-quality, cutting-edge research and develop home grown solutions to our health system challenges.

“More importantly, the institute should be driving partnerships with the private sector to translate findings of research into products and evidence for improving and strengthening our health systems,” he said.

The News Agency of Nigeria (NAN) reports that other members of the NIMR Foundation board of trustees include, Prof. Oni Idigbe, former D-G of NIMR, Dr Olajide Sobande and Mrs Moji Makanjuola a veteran broadcaster.

NAN also reports that the foundation was established in February 2020.