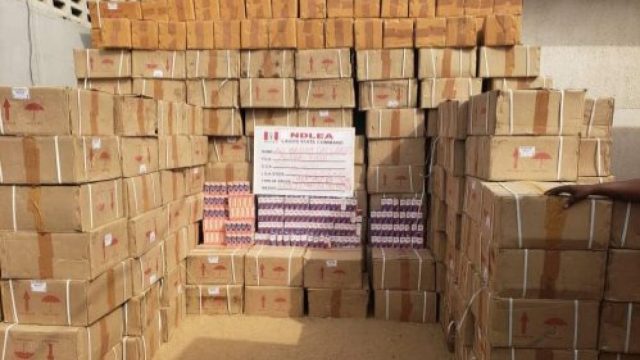 The National Drug Law Enforcement Agency (NDLEA) confiscated 8,381,600 Tramadol pills and tablets, as well as 56,782 bottles of codeine in a major raid operation in Lagos.

Brig. Gen. Mohamed Buba Marwa (Retd), the Chairman/Chief Executive, had authorized sustained surveillance on some targets in the Satellite town and Alaba Rago regions of Lagos, just before Christmas.

According to a statement released by NDLEA spokesman Femi Babafemoi on Sunday the Satellite town target was eventually raided on Thursday 23rd December, when the drug kingpin, Ezekiel Ibe, was detained and over five tons of high milligrams Tramadol; 225mg and 100mg recovered from his warehouse.

On Monday, December 20th, following tasking surveillance in a dangerous neighbourhood in Alaba Rago, Alaba region of Lagos. Babafemi revealed that one Surajo Mohammed was arrested with 941.14kg cannabis and another 56,782 bottles of codeine which were seized from the store of another drug lord who is currently at large.