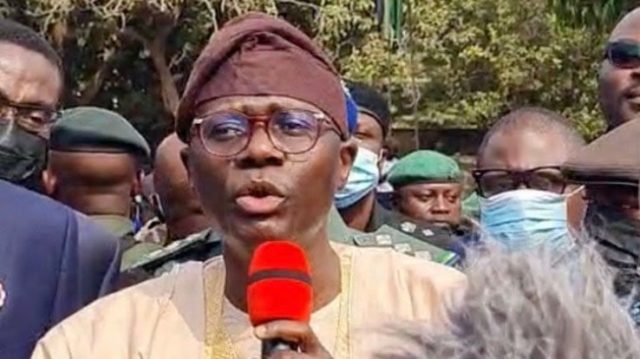 Despite Lagos State Governor Sanwo-Olu’s directive to armed policemen to vacate the Magodo Phase 2 Estate area of the state, an anonymous Chief Superintendent of Police, CSP, who led the police team, defied the order.

The CSP claimed that they were in the estate on the instruction of the Inspector-General of Police, IGP, Usman Baba Alkali, through the Attorney-General of the Federation, AGF, Abubakar Malami (SAN) and had not been directed to leave the area.

The governor’s intervention came during his unscheduled visit to the estate yesterday, after fresh protests by residents over the large presence of armed policemen in the estate was reported.

Sanwo-Olu, in the company of the state’s Attorney-General and Commissioner for Justice, Moyosore Onigbanjo; Assistant Inspector-General of Police, and Commissioner of Police Lagos State, Hakeem Odumosu visited the community to ensure peace and tranquillity.

LagosPost reported that on Tuesday, December 21, 2021, some persons described as miscreants, acting on the directive of the judgement creditor, Adebayo Adeyiga, and court bailiffs, allegedly, invaded the estate, with the aim of taking over the land and property of residents, following purported court order ceding the land to Adeyiga.

Consequently, again, yesterday, executives of the Magodo Residents Association, MRA, ordered the two main gates leading into the estate shut in order to prevent any form of invasion.

However, during the few hours of disturbance, residents and other people were allowed to go out of the estate but were prevented from reentering the estate.

Protesting residents were seen displaying placards of various inscriptions to express their displeasure and agitations.

They queried the presence of the policemen who were said to have been in the estate since last month.

Some of the inscriptions read: ‘Lagos Attorney-General prosecute those involved in an illegal invasion of Magodo Phase 2’, ‘ and Magodo Phase 2 has been under siege of the IGP’s anti-riot police squad for three weeks.

The residents subsequently called on the governor to intervene.

Taking heed to their call and complaints, Sanwo-Olu promptly visited the scene and told the leader of the police delegation that the land matter is a case between private individuals and the state government.

Sanwo-Olu said: “Can you call your superiors in Abuja and tell them that the governor is here, and as the Chief Security Officer, you don’t have any business being in my state right now and that I want you to disengage right now?”

The CSP replied: “I am here on the instruction of the Inspector General of Police through the AGF. I am too small or too low to call them. Your Excellency sir, you can call them sir.”

When asked the actual number of policemen at the estate, the adamant CSP told the governor: “My men are here; they are all over the place; I cannot precisely tell you how many we are. For security purposes, I cannot tell you the number.”

Apparently, disappointed Sanwo-Olu said: “They (policemen) are not from the Lagos State Police Command. They said they are from Abuja. I don’t know what other interests they have beyond keeping the peace of the country. This is not an expectation that I expect from them because they don’t have any business here.”

Sanwo-Olu, subsequently, summoned an emergency meeting of all warring parties in the Magodo Phase II crisis with a view to resolve the lingering land dispute issue.

The governor, speaking to protesting residents said: “This is a very difficult one to start the New Year like this. It’s because of the importance we see to the information and misinformation that I have to come here myself. When the first attempt to invade the estate before the New Year I did intervene. If you remember, the action was immediately halted and the situation was brought under control.

“What we should understand is that residents, the land creditors who went to court, even the police are my subjects, so I have the responsibility to ensure fairness and equity is entrenched.

“We all have our roles to play in all of this. I have spoken extensively with IGP and A-G and resolved all of the issues.

The governor, who assured residents of their safety, both lives and property, urged them to go about their normal business activities as the issue would soon be put to rest finally.

Earlier, the Chairman of Magodo Residents’ Association, Bajo Osinubi, in his reaction to the development, said: “We called our people out to protest this morning.

“Over 50 policemen are living within the estate. We want the police out of our estate.

“There are no cases of kidnapping, rioting, but why are they still here? We want them out of our estate.

“We want to live in peace. This is a business between the Lagos State government and the Adeyiga family.

“We are under siege; the police have been here for two weeks, they came in December to take possession of properties on behalf of Adeyiga Family and others.

“We are victims, even inside our own homes. The police have been here. They are very restless.

“We’ve allowed people to go out, but we are protesting this morning to let the world know what’s going on. We are supposed to be at work, but we want the whole world to know what’s happening at Magodo.

“We need the government to do the needful to get the family off our neck. About four to five years ago, they did it, and now again this year, they want to do it.”

The Commissioner for Information and Strategy, Mr Gbenga Omotoso, reacted over the development, stressing the need for true federalism where a Governor as the Chief Security Officer of the state does not have control over security architecture in the state.

Omotoso recalled that the 17 Southern governors in July 2021 resolved that security agencies must notify them as the chief security officers of their states before they carry out any operation within their individual domains but, the Federal Government through the Nigeria Police Force, the Nigerian Army, and other security agencies have continued to disobey the resolution.

”The lack of control over security apparatus by governors had over the years necessitated the call for true federalism,” he said.