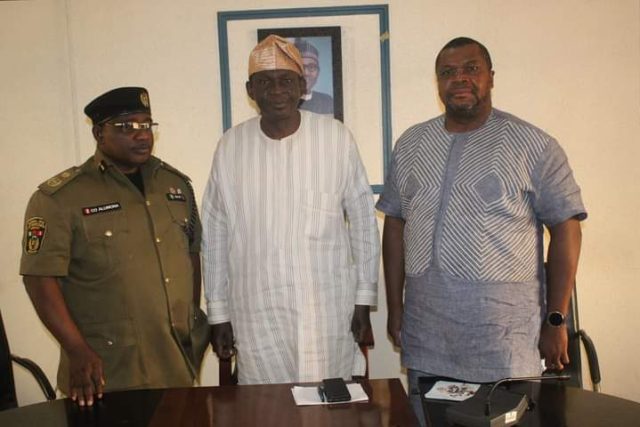 The Honourable Commissioner for Special Duties and Inter-Governmental Relations, Lagos State, Engr. Tayo Bamgbose-Martins has commended the National Drug Law Enforcement Agency (NDLEA) for its efforts at curbing the menace of drug trafficking and abuse in society.

Engr. Bamgbose-Martins gave the commendation while welcoming the new State Commander of the Agency, Barrister Cally O. Alumina (CN), who was on a courtesy visit to his office in Alausa, Ikeja.

He expressed the State Government’s readiness to rid the society of the menace of drug abuse in collaboration with NDLEA and all other relevant Agencies, assuring the delegation that the Ministry will be supportive in the area of sensitisation on the dangers of drug trafficking and abuse.

While promising to also engage other related MDAs on the issue, the Commissioner stressed that it was imperative for the NDLEA to collaborate with the State government to ensure an encompassing effort in tracking and combating drug addiction, especially amongst the youths.

On his part, the Permanent Secretary in the Ministry, Dr Tajudeen Omobolaji Gaji, applauded the NDLEA and promised that all hands will be on deck to positively ensure effective collaboration between the State and NDLEA.

Responding, Barrister Cally O. Alumina (CN) appreciated the State Government for its supportive role towards the organisation’s set goals and objectives, adding that Lagos State has always been a Centre of Excellence and is always setting the pace among others.

While noting that President Muhammadu Buhari has recently launched a war against Drug Abuse, the new Commander reiterated the commitment of the Agency to eradicate the trafficking and abuse of drugs in Lagos and Nigeria as a whole.