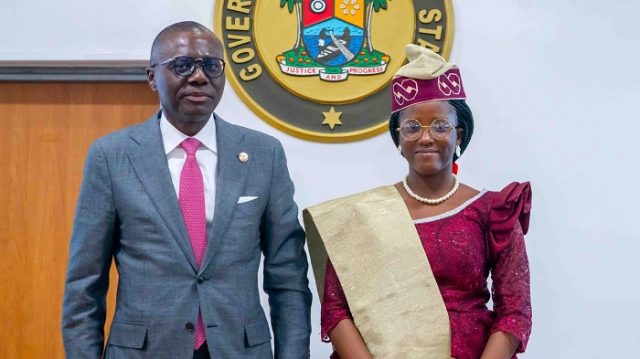 Miss Marcus made the announcement in Lagos on Monday, when Governor Babajide Sanwo-Olu ceremonially handed over the reins of power to her for a day to serve as acting governor.

According to the teenager, more money would benefit more schools, particularly those where pupils learn in difficult conditions.

She harped on the need to invest more in digital literacy in the state’s public schools, imploring Mr Sanwo-Olu to ensure that the promised metropolitan fibre is installed in public schools.

Miss Marcus, a native of Edo, won the 2020 edition of the Spelling Bee Competition, and as a result, earned the honour of becoming a one-day governor.

While presiding over the cabinet meeting, she applauded Sanwo-Olu’s government for launching commendable programs through the T.H.E.M.E.S agenda to improve governance and service delivery.

”Mr Governor, I commend your team for excellent leadership and being proactive in critical sectors. In education, the state government has embarked on revamping schools and delivering new ones to improve access,” said the teenager. ”This effort has been complemented with massive innovative programmes, such as EKO EXCEL, Lagos Learns Together, Read Loud, EKO Digital School, and job initiative.”

She added that the one-day governorship was a “dream come true” for her.

Governor Sanwo-Olu while speaking, stated that the one-day governorship program was one of the state’s methods for grooming future leaders.

”I am delighted to say that the competition has been achieving its desired vision and objectives. The organisers will be following up on your future endeavour to ensure you acquire the right leadership skills and become responsible citizens,” noted the Lagos governor. ”Your success at the competition is an encouragement for us to do a lot more, especially in education.”