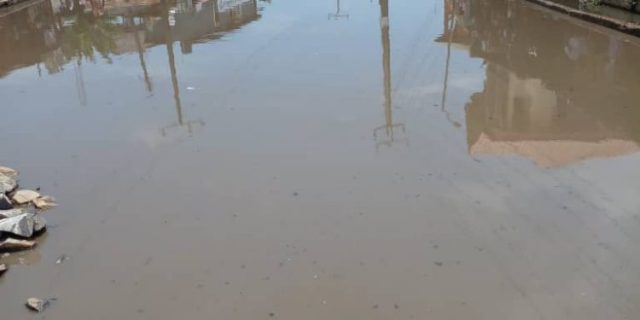 Residents of Aka Road, Ajangbadi, in Ojo Local Government Area (LGA) of Lagos State, have beckoned on the governor of the state, Mr Babajide Sanwo-Olu, to come to their aid over a failed major road in the area.

The residents of the community lamented over untold hardship and huge economic loss owing to the dilapidated nature of Aka Road and other link roads in the area.

Motorists and commuters are finding it difficult to connect to the area. Their pains are worsened whenever it rains, as many of them have bought rubber boots to navigate their way through the stagnant pool of water on the road.

However, it was gathered that some vehicle owners have abandoned their cars at home and are left at the mercy of commercial motorcycle riders.

According to reports, Okokomaiko to Ajangbadi, through Aka Road, has been completely cut off. Vehicles coming from Okokomaiko cannot get to Ajangbadi; the journey is truncated at Church Bus Stop.

People have to continue their journey by trekking through the potholes that dot a long stretch of the road.

It was also noticed that the canal at Corner Bus Stop was blocked with waste and sand, thereby pushing the water into the road. To the residents of the area, it has been a painful experience.

Speaking on the situation, the Baale of Ajangbadi, Chief Teslin Jimoh Yakuju, Oniba 1, told the reporter that he has called on both the state and local governments to help fix the road. He said that he was promised that something would be done about it in 2022.

As a temporary relief, the Baale, however, called for a quick palliative measure on the road pending when the comprehensive repair would be done.

He said: “The situation has affected us so much all, including landlords, shop owners and motorists. Vehicles coming to Ajangbadi from Okokomaiko can no longer get to their destination. We have called on the Ojo local government and the state government, they said they would do it but not this year. As we are in the rainy season, businesses are closing every day. How long shall our people continue to suffer?”

Yakubu also stressed that he had, in the past, called on the residents to, on their own, help in maintaining the road, which they did. But he said that self-help was not enough in finding a lasting solution to the situation.

“Before, I used to gather the community, so we do the little we could just to enable vehicles to access the road, but now the road has totally collapsed. Businesses are vacating the environment because of the situation,” he said.

A trader, Mr Bennett Ositadimma Okolie, whose shop is located on the affected road, lamented that they have been suffering for over three years. He maintained that the traders on the axis were no longer making any reasonable sales. In his words, paying shop rent has become difficult.

He said: “As you can see, no vehicle is passing here. Before now, vehicle owners would see our goods and stop patronizing us. But everyone now avoids the road and our businesses are suffering.”

Okolie frowned at what he called wickedness on the side of the government. He said that irrespective of their situation, they still pay different taxes to the government.

He lamented: “Even as the bad road has crippled our businesses, we still pay tax to the government. Sometimes we quarrel with them.

“In the past, a man used to maintain the road for us. But that has stopped due to irreconcilable differences with some government official.”

Also speaking, a pharmacist in the neighbourhood, Mr Chiyere Ugoeze, said that he used to stock up to N20million worth of goods in his shop, but now, he cannot boast of N500,000 worth of goods.

“We are begging the governor of Lagos to repair the road for us all to no avail. We are not asking for much. Even if it is just to fill the roads so that vehicles could be playing it, pending when they would do the main job, we would appreciate it,” Ugoeze said.