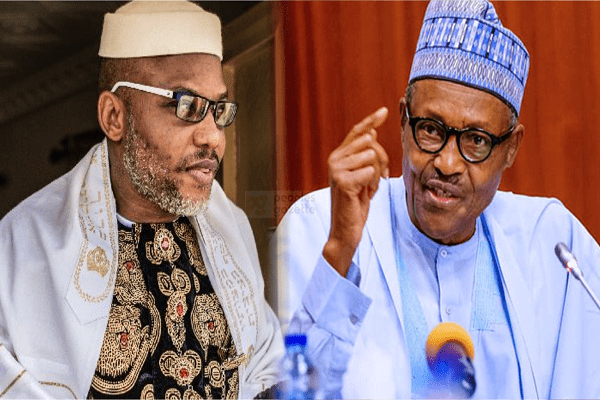 President Muhammadu Buhari has sworn never to release the leader of the Indigenous People of Biafra (IPOB), Mazi Nnamdi Kanu.

He stated this in his latest interview with Channels, where he said he would not interfere with the Judiciary.

Some Igbo leaders had previously met with the President to request for the unconditional release of Kanu.

While responding to the pleas of those Igbo leaders, Buhari said it is a heavy decision to take but will be considered.

However, during his interview with Channels, when asked if he would release Kanu, Mr President said: “We cannot release Nnamdi Kanu. There is no political solution to it. His case is for the judiciary. One of the things I promised myself is never to interfere with the jobs of the judiciary. I have given him the opportunity to defend himself.

Kanu has been insulting us. He has been given incorrect figures and comments against us. He needs to account for what he did.”

Kanu, the Leader of Indigenous People of Biafra, IPOB, is standing trial on treasonable charges preferred against him by the federal government.