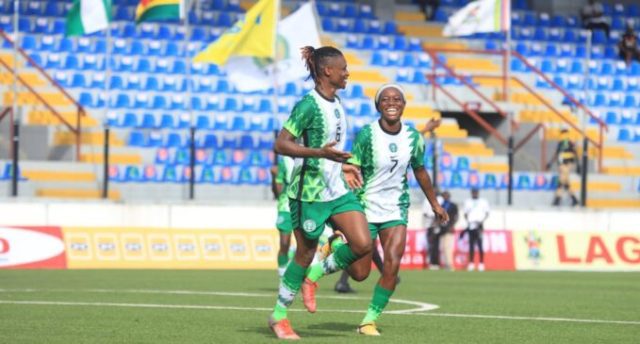 Uchenna Kanu became the woman of the match, as she scored the two goals that made the Super Falcons defeat Ghana 2-0 in the first leg of the 2022 African Women’s Cup of Nations, held on Wednesday at the Mobolaji Johnson Arena, Onikan, Lagos.

With Nigeria controlling the first minutes and enjoying the bulk of possession, Kanu gave them the lead in the 22nd minute after a pass from Francisca Ordega, which opened the Black Queens defence.

Both teams went into the half-time interval with the Falcons in full control.

The home team continued their dominance in the second half, but could not add to their tally.

With the win, Falcons secured their 11th victory in 18 encounters against their fierce rivals ahead of the second leg at the Accra Sports Stadium on Sunday.

The winners of the tie will compete with the winners between Niger and Ivory Coast for a place in the 2022 AWCON in Morocco between July 2 and 23, 2022.

The AWCON is a qualifying tournament for the 2023 Women’s World Cup that would hold in Australia and New Zealand.

Eguavoen steps down as Super Eagles coach after Tunisia defeat

Stanbic IBTC, NFF signs in Lagos, memorandum to insure all members of the National team