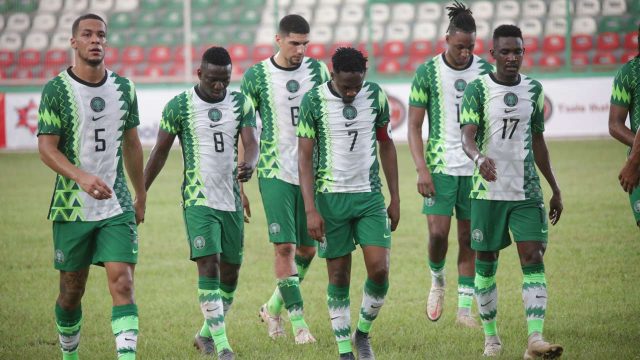 In the run-up to the 2021 African Cup of Nations (AFCON) in Cameroon, Super Eagles interim head coach Augustine Eguavoen has told his players to play according to instructions.

Eguavoen also said he had explained how he wants them to play, therefore demanding a 100 per cent commitment from his players.

He added, “So the next job for me now is to see how they apply their skills and abilities during our training sessions and see those who best fit into the various positions and the way we want to play.”

Eguavoen made this statement after the team’s first training session on Sunday at the Moshood Abiola National Stadium in Abuja.

The addition of Zaidu Sanusi, who joined the team from FC Porto, Portugal, brought the number of arriving players who participated in the team’s first training session to 12.

Players were put through their paces by the coach, who expressed delight with their performances, pointing out that the team has a lot of energy and speed.

“I am very impressed with what I’ve seen today. The team is a good blend of both the young and experienced players. A majority of the players that made the 28-man list and who participated in the team’s first training session today are quite young.

“So, there is a lot of energy, there’s a lot of speed, and that’s exactly what you need in the game of modern-day football.”

The Super Eagles coach was also disappointed about the absence of some key players in the squad.

Eguavoen added:“I was in constant touch with Emmanuel Dennis, and he indeed made a lot of efforts (to join the Super Eagles squad). But his club (Watford FC) refused to release him, and unfortunately, there is nothing anyone can do about the situation.”

The team will have two more training sessions before departing Nigeria on Wednesday for their camp in Garoua, Cameroon.